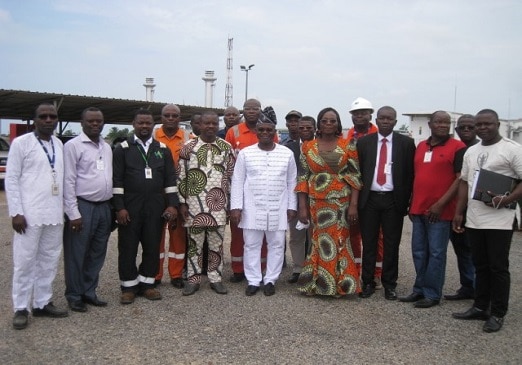 Benin Minister of Energy, Jean Claude Houssou, acting also as the Chairman of the Council of Ministers of the West African Gas Pipeline Authority (WAGPA)

The familiarization visit, was to enable the Minister obtain firsthand information on WAPCo’s operation. He was accompanied by the Mayor of Ouidah, the area where WAPCo’s facility is situated, officials of the Ministry and some local authorities.

WAPCo’s Site Coordinator for the Cotonou facility, Harold Nounagnon welcomed the Minister and his team and took them round the facility. The team later held a brief discussion with some WAPCo Cotonou staff. The discussion centered on issues such as the pressure of gas transported through the West African Gas Pipeline (WAGP), the daily quantity of gas delivered to CEB in Cotonou, WAPCo’s relationship with neighboring communities and the maintenance of health, environment and security standards in the company’s operations.

The Minister said the government of Benin was counting on WAPCo, as key actor in the industry, to transport gas to the new power plant under construction at Maria Gleta.

He said he was impressed by the high level of security, environment and health standards observed at the facility. He also highlighted the importance of the role WAPCo plays to sustain energy availability at the sub-regional level.

In an interview with the media at the end of the visit, the Minister who is also the chairman of WAGP council of Ministers, said he will do his best to support WAGP, which he said needed to be extended to other West African countries.